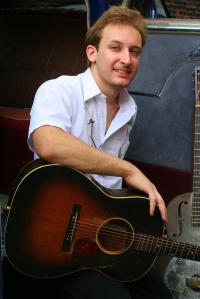 On Thanksgiving night if you’re feeling like you can move after stuffing your face then you should head down to Blues BBQ Co. in downtown Roanoke for the Jesse Ray Carter Trio. Starting at 10pm and going late, get your Turkey Day drink on!

On “Black Friday”, November 26th the Water Heater on 5th Street is hosting the CraftStar Bazaar! CraftStar has been dubbed Roanoke’s “first indie craft fair” and will feature all kinds of homemade knick knacks, crafts and goods for sale! The Water Heater will open its doors on the 26th from noon til 7pm then again Saturday from 10am til 5pm! For more info about this event feel free to email the events organizers here.

Also on “Black Friday” Roanoke nu-grass outfit Grass Monkey will be playing Blues BBQ the night after the Jesse Ray Carter Trio performs the very same stage. Starting at 10pm and going til midnight join the boys for a good time of beer, tunes and turkey/tofurkey stuffed bellies!

Roanoke DJ/MC extraordinaire Joneski is providing the jams at Floyd’s own Dogtown Roadhouse on Saturday night, November 28th. Starting at 9pm Joneski will be spinning, rapping and dancing for your entertainment until 2am! This dude rolls with vinyl and makes a lot of his own beats, come check him out and DANCE!

On Monday, November 29th the Shadowbox microcinema on Kirk Ave. is showing 1979 film Quadrophenia. The film stars Phil Daniels as Jimmy a London mod growing up in a dysfunctional  household.  Based loosely on the Who’s rock opera of the same name and co-written by Pete Townsend Quadrophenia has everything from mod vs. rocker showdowns to pill popping depressed teenagers with no better outlet than riding their scooters and battling their parents who just don’t understand. With musical direction from the Who this film is worth heading downtown this Monday and paying your respects to this cult classic. Starting at 7pm, don’t be late!